Some People have ability to do more than what a normal human being can do. As normal human beings, we are limited in what we can do, but there are some people, who can do extra-ordinary things, which always put us in wonder. Such people are rightly called as 'Super Humans' and here is a man whose body is immune to high voltage electricity ! 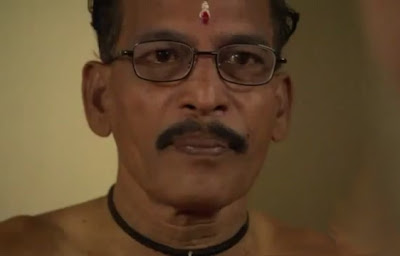 While thousands of people around the world die because of electric accidents, Raj Mohan Nair, an Indian super human, can withstand large currents of electricity with no harms caused ! Normally, a fraction of one ampere could kill an average man, but Raj Mohan can conduct 10 ampere of current through his body ! 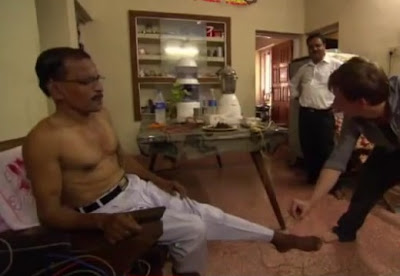 His body is said to be ten times more resistant to electricity than normal human being's body. There is a story behind how he found out this super power inside him. When his mom died, Raj Mohan broke down and decided to die. So he went to hold a high tension wire of an active transformer. On holding the live wire, nothing happened in real! He himself was shocked by this incident and came to know about his resistance power.

He wraps exposed wires around his body, and electricity flows from main plug, through his body, to electric bulbs, iron plates, mixer grinders etc, but he suffer no electric shock.

This kind of things happen rarely and not everyone can do this. Raj Mohan's body has a high resistance power which, no normal human posses. So please don't try this at home, 'cause your Life is precious :)

TOTAL FAKE! If the guy have over 1 million ohms there would be .24mA of current which would NEVER EVER LIGHT A LIGHT BULB!!

What's up it'ѕ mе, I am also visitіng this
wеb page regularlу, this web page is in faсt pleasant and the
people are in fact sharіng faѕtiԁіous thoughts.
Here is my website - m-t-i.co.uk

I have being on blog Sites for a while now and today I felt like I should share my story because I was a victim too. I had HIV for 6 years and i never thought I would ever get a cure I had and this made it impossible for me to get married to the man I was supposed to get married to even after 2 years of relationship he broke up with me when he finds out I was HIV positive. So I got to know about Dr. Itua on Blog Site who treated someone and the person shared a story of how she got a cured and let her contact details, I contacted Dr. Itua and he actually confirmed it and I decided to give a try too and use his herbal medicine that was how my burden ended completely. My son will be 2 soon and I am grateful to God and thankful to his medicine too.Dr Itua Can As Well Cure The Following Disease… Cancer, HIV, Herpes, Hepatitis B, Liver Inflammatory,Diabetes,Fibroid, Get Your Ex Back, If you have (A just reach him on drituaherbalcenter@gmail.com Or Whatsapp Number.+2348149277967)He can also advise you on how to handle some marital's issues. He's a good man.